US equity markets started the week recouping from last week’s losses in hopes of a cooler CPI print and a more dovish stance from the Federal Reserve Open Market Committee.  Investors did cheer a lighter-than-expected CPI report that showed headline and core consumer prices moderating. However, a deeper look into the data showed that food, shelter, and services prices remain elevated. Headline CPI increased by 0.1% versus the consensus estimate of 0.4%. Core CPI, which excludes food and energy, increased by 0.2%, which was lower than the expected 0.3%. On a year-over-year basis, headline CPI fell to 7.1% in November from 7.7% in October. Similarly, the Core reading fell to 6% from 6.3% year-over-year. 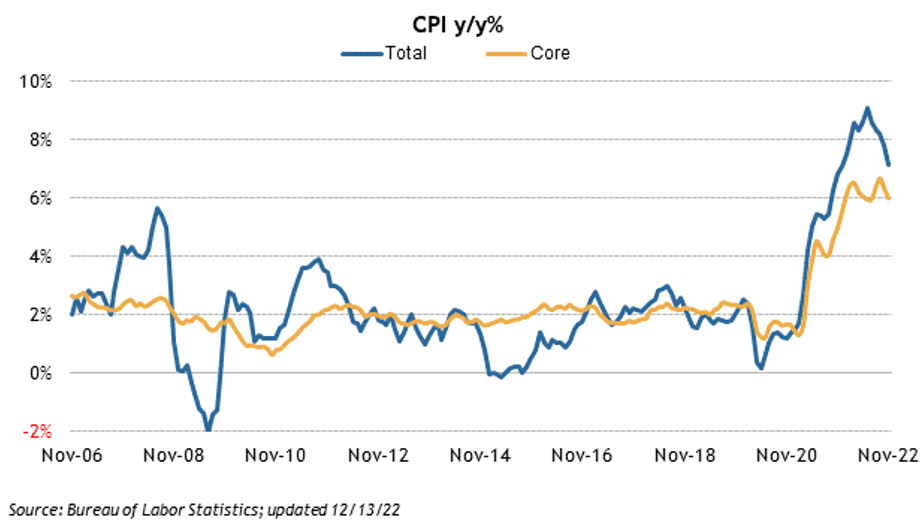 A more hawkish than anticipated Fed Chairman and Summary of Economic Conditions catalyzed fears that the Federal Reserve will tighten monetary policy too much and send the economy into a deep recession. Investors went to the sidelines after the release of the FOMC statement and continued to sell equities off over the next couple of sessions. The Federal Reserve increased its policy rate by 50 basis points to 4.25%-4.5% and announced that it would continue to normalize its balance sheet by allowing $60 billion in US Treasuries and $35 billion in agency mortgage-backed securities to roll if its balance sheet monthly. Terminal rate forecasts provided in the Fed’s most recent dot plot increased to 5.1% from the 4.6% projected in September. 17 Fed officials predict the terminal rate to be north of 5% in 2023, while two expect a terminal rate to be north of 5.5%. This increase in terminal rate expectations suggests the Fed will continue to hike rates in 2023 and also implies no rate cuts in 2023. Interestingly, US Treasuries rallied over the week on the notion of a US recession.

Global central banks also announced more tightening of their monetary policies. The Bank of England increased its policy rate by 50 basis points along with the Hong Kong Monetary Authority, the Norges Bank, the Swiss National Bank, and the European Central Bank.   ECB President Christine Lagarde was extremely hawkish in her post-statement Q&A. She suggested that the ECB still has a long way to go with rate hikes and suggested that several more 50 basis point increases were on the table. The ECB also announced it would commence the normalization of its balance sheet. Yields on European Sovereign debt shot higher, especially in periphery markets such as Spain and Italy. Additionally, European equities sold off. 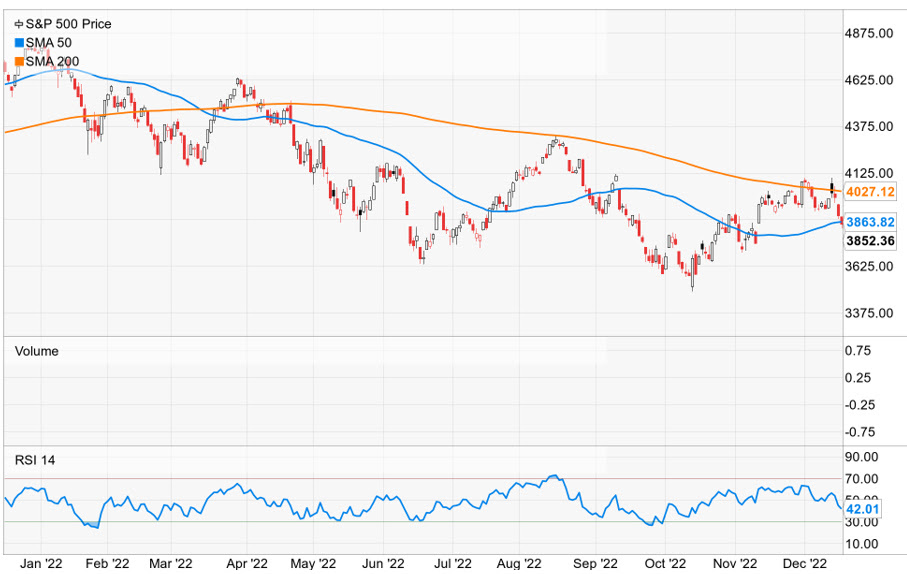 Investment advisory services offered through Foundations Investment Advisors, LLC (“FIA”), an SEC registered investment adviser. FIA’s Darren Leavitt authors this commentary which may include information and statistical data obtained from and/or prepared by third party sources that FIA deems reliable but in no way does FIA guarantee the accuracy or completeness.  All such third party information and statistical data contained herein is subject to change without notice.  Nothing herein constitutes legal, tax or investment advice or any recommendation that any security, portfolio of securities, or investment strategy is suitable for any specific person.  Personal investment advice can only be rendered after the engagement of FIA for services, execution of required documentation, including receipt of required disclosures.  All investments involve risk and past performance is no guarantee of future results. For registration information on FIA, please go to https://adviserinfo.sec.gov/ and search by our firm name or by our CRD #175083. Advisory services are only offered to clients or prospective clients where FIA and its representatives are properly licensed or exempted.